On March 8, 10 students of a south Kolkata school were made to “confess” in writing that they were lesbians and had indulged in “indecet behaviour”.

The incident attracted national attention after outraged parents claimed the girls were arm-twisted into signing the letter. They said that if two persons hold hands or put their arms around each other, it does not mean they are lesbians.

On Monday, a group of activists including members of human rights organisations and some LGBTQI members, turned up outside school to protest against the shaming of homosexuality by the school authorities, reported Times of India

The event, Samakami Aami Bhalobasi Aami, was created on Facebook with 192 registrations till Monday morning with as many as 80 people showing interest in joining the programme. However, when it came to actual participation in the demonstration, only 30 people turned up. 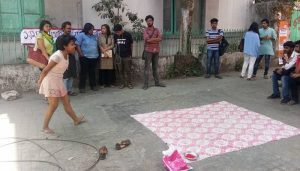 The group, formed a human chain outside the school and performed two street plays against the “demonisation of homosexuality”.

The demonstration did not get any support from the guardians or the students either.

Given the utter lack of support for such campaigns, it only highlights deep rooted bias towards homosexuality.

“The low turnout suggests the overall attitude of society towards homosexuality and we need to change it. But this is a start and we will carry it forward, hoping for a better response,” Anustup Roy, an IT analyst who attended the event, told Times of India.

In an official statement, the Indian Psychiatric Society has declared there is “no evidence to substantiate the belief that homosexuality is a mental illness or a disease.”

“Are students in co-ed schools asked to write a confession about their heterosexuality when they are seen spending time together?” wonders Malobika, co-founder of Sappho for Equality — The Activist Forum for Lesbian, Bisexual Woman and Transman Rights, in a report by Indian Express.

At a time when teachers are uncomfortable in discussing heterosexuality with students, dealing with homosexuality seems to be a far cry.

“Even heterosexuality is not easy for teachers to discuss with pre-adolescents and adolescents, so dealing with homosexuality is a real stretch,” said Kavita Anand, an educationist and director of Adhyayan Quality Education Services, in a report by Firstpost.