I’m extremely excited today. There is no doubt that today’s Supreme Court judgement on the Right to Privacy is historic. But what got my heart pumping with joy was reading the paragraphs 126, 127 and 128 of the awesome judgement. The nine judge bench which held right to privacy as a fundamental right of every citizen also acknowledged that an earlier Supreme Court judgement which recriminalized homosexuality was plain WRONG!

Do you guys remember what happened in 2013? If you do not, let me recap. A Supreme Court bench of two judges decided that being gay in India is a CRIME. They overturned a judgement by Delhi High Court Chief Justice AP Shah in 2009, who basically decriminalised homosexuality as he found that it violated the right to equality provision in the Indian Constitution.

The reason those two judges gave for recriminalising homosexuality was pretty stupid!

And that’s exactly what the nine judges of supreme court said today (If not in those words!)

So, there are three basic arguments

In 2013, the Apex Court maintained that people affected by section 377 which criminalises homosexuality are minuscule in number. So their rights don’t matter. Just throw them under the bus!

Today, the honourable court pointed out that being a minuscule minority is no reason to deny anyone their fundamental rights. Guys, we are a nation of law, not country governed by whims and fancies of majoritarian opinion. Listen to this: “The purpose of elevating certain rights to the stature of guaranteed fundamental rights is to insulate their exercise from the disdain of majorities, whether legislative or popular.” Yup! Yup! So, being a sexual minority doesn’t mean you have no right to privacy. Yes, we do!!!

BTW, I have always wondered how did those two judges conduct a census on the number of gay or bisexual people? Weird!

#2 The only 200 prosecution argument

The second argument given by the Supreme Court bench of two in 2013 is kind of an extension of the first one and even more stupid. Basically, the two judges thought if only 200 people had been prosecuted under the British-era law in 150 years, it was perfectly fine to keep it going.

:O Yea… I know! Even I was shocked by this justification. Thankfully, the constitutional bench today pointed out that violation of fundamental rights of even a few cannot tolerated. The judges talk about the chilling effect that violation of one fundamental right has on the other. “The chilling effect on the exercise of the right poses a grave danger to the unhindered fulfilment of one’s sexual orientation, as an element of privacy and dignity” Hear! Hear! 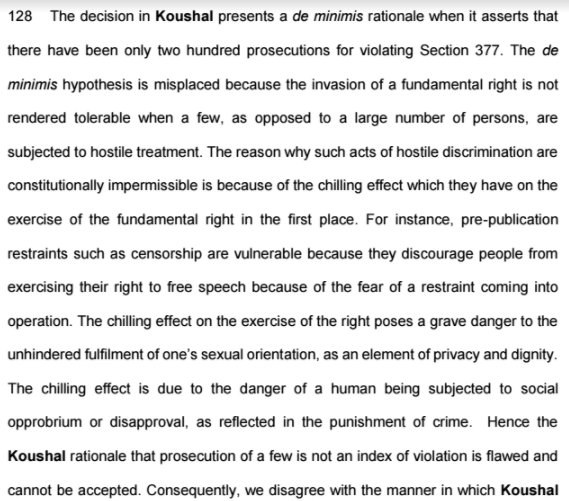 Striking down Delhi High court judgement of Justice Shah, in 2013 the Apex court had said “in its anxiety to protect the so-called rights of LGBT persons…” The court today found the very usage of the term “so-called” problematic.

“Their rights are not “so-called” but are real rights founded on sound constitutional doctrine. They inhere in the right to life.”

“They constitute the essence of liberty and freedom. Sexual orientation is an essential component of identity” 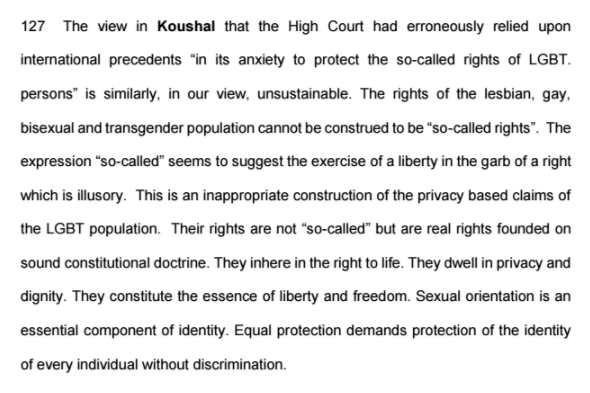 So, now let’s hope when the curative petition on section 377 comes up at 5 member constitutional bench of the Supreme Court, these parts of the Right to Privacy judgement find a strong basis for decriminalising homosexuality in India, once and for all.