In a first recorded case of its kind, a transgender woman was able to successfully breast feed her partner’s new born baby for a period of six weeks.

The 30-year-old, according to the journal Transgender Health, underwent a regimen of hormonal therapy along with the use of a breast pump, a procedure which is also employed on woman who cannot produce their breast milk on their own.

The report said the patient began producing droplets of milk within a month, and post three months, she had increased her production to eight ounces of milk per day.

The trans-woman explained that her partner was pregnant but was not keen to breastfeed the infant, so she decided to take on the role of being the primary food source for her infant.

She had been receiving feminising hormone therapy for the past six years as well as was being treated for insomnia and anxiety, but otherwise appeared to be a pleasant, well-nourished, well-developed woman, Tamar Reisman, who co-authored the study with Zil Goldstein at New York City’s Center for Transgender Medicine and Surgery, told The Washington Post. 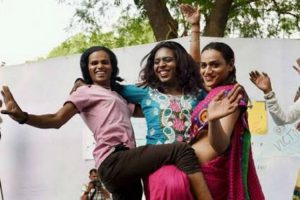 “We believe that this is the first formal report in the medical literature of induced lactation in a transgender woman,” he added.

The patient, however, had not underwent any gender reassignment surgeries, breast augmentation or vaginoplasty.

Though, the case study has been hailed as a ‘breakthrough’ moment for transgender community, a section of members remains skeptical about the development.

“We all want to have the same experiences as women,” Maria Clifford, 38, a British transgender mother who has been using a surrogate to breastfeed her child, told The Star. “We need further testing and evidence to show that these drugs aren’t going to cause harm to the baby.” she added.