A couple of days before, I was there in my college in the University of Delhi, relishing the picturesque performances from the varied societies. It was the day of my farewell. My good old days had come to an end, and it was only then did I realise: What now? Dark shadows, wrinkled worry lines enveloped my otherwise gleeful face. Should I go for higher studies or look for a job? A difficult thing, right—the latter part! By then, the sweet melodies had paved way for hoarse voices of the demonic ‘unemployment’. Given that none of the organisations had visited my college for placement, it was going to be a tough ride finding one. I began doubting my abilities, doubting all those praises from my worthy teachers and friends. Is the outer world that competitive? Am I not good enough?

India claims that its economy is experiencing a herculean growth, that it’s growing twice as fast as the rest of the world but when it comes to creating jobs and rendering employment, the story takes an underwhelmingly opposite turn: over more than 30 per cent of the youths aged 15–29 in India aren’t employed or are in education and training. Shocking, isn’t it?

According to Organisation for Economic Cooperation and Development(OECD), the unemployment of the youths is more than double the average of OECD percentage of 14.56 and almost three times that of China. With the dearth of quality jobs in the system and the little or negligible incentives paid by the employers, these jobs—where often the youths find themselves by their employer with long rigorous hours of working—were kept under the ambit of education and training.

The situation is grim. A person’s ability is judged according to the depth in his CV, which in turn, is determined by his work experience. In this very competitive race, students bunk their classes and run behind the potential employers—but they won’t hire him. Why? The classic catch-22 phrase says it all: Nobody will hire you until you have the required experience but you won’t get any experience until someone hires you.

The competition is so scary that even if an intern asks for a tiny stipend, the employers could easily shrug them off over others who would agree to do their work for free. In the name of the cool hip group and the huge reputation that comes with these companies, students get wooed and overwhelmed by the prospect of receiving a Letter of Recommendation. They easily lose the essence that comes with the internships: to work towards their field of interest. 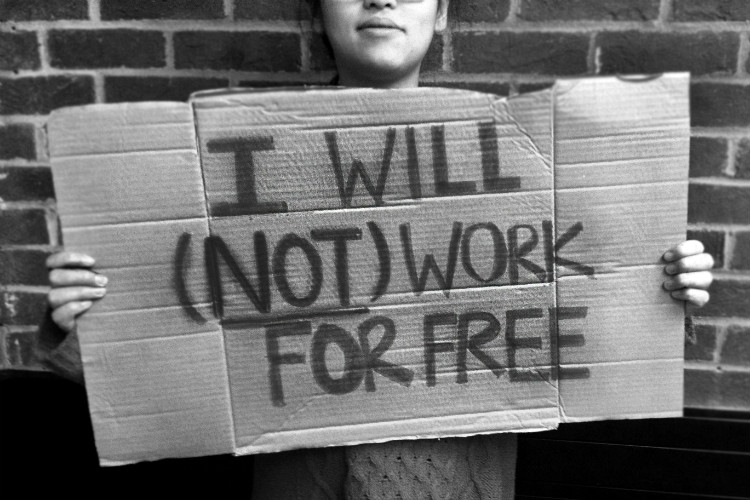 Today the world is celebrating Labour Day or International Workers’ Day. What’s ironic is the fact that I’m still writing this story on the day that is supposed to be a public holiday.

Eight hours of work, eight hours of recreation, and eight hours of rest—that’s the movement from where the Labour Day originated; and this is what an ideal day would look like, right? You wake up after a sweet and sound sleep, come to the office, and leave after eight hours. Happy day, happy night, happy life—but wait, where’s the happy boss?

Work-life balance isn’t just the only problem the employees face these days. The challenges they go through each day, the battle they wage against the constant fear lurking in their head over whether they would sit in their cubicle the next day is daunting. Just a couple of weeks back, India’s third-largest information technology service provider, Wipro, sacked 300-600 employees; Snapdeal laid off about the same number a couple months back. Serious stuff!

The government must stress on enhancing the quality of education and vocational training and should spend more resources on it. They need to ease the otherwise complex and relatively strict labour laws. In this world of grief and fear, the employees are having a tough stay—and it’s going to be tougher each day. What they seek, is a little to breathe. Let’s give them that, shall we?