Though divorce rates in India have gradually increased over the last decade, nearly two-thirds of respondents in a NET survey cite ‘social binding’ as the prime reason for women’s remarriage being stigmatised. The stigma around women’s remarriage is what prompted Gokul Sreedhar, a 23-year-old engineer from Kollam, Kerala, to write a Facebook post in Malayalam about his mother’s second marriage.

“It was my mother’s wedding. I had pondered a lot over whether to write such a post. Remarriage is still a taboo for many. Don’t look here with eyes full of suspicion, contempt or hatred, and even if you do, there is no one here who would care.”

In the post, Sreedhar mentions that he was in Class 10 when his mother walked out of an abusive marriage. A teacher, she had to leave her job because of family feuds in order to begin anew.

“She is a woman who kept aside her life for me. In her marriage, which was a tragedy, she has suffered much. When I saw her once with blood oozing out from her forehead after being assaulted, I had asked her why she was still enduring it. I remember what Amma told me then, that she was living for me and she was ready to endure more.”

A Joint Secretary of the Students Federation of India (SFI) in Kollam, Sreedhar also writes about the day he and his mother walked out of their old life.

“When I left that house holding my mother’s hand, I had vowed that day, that I will make this (her remarriage) happen. My mother who kept aside her youth for me has many dreams to achieve and heights to conquer.”

Though his father took care of his studies, his mother was the primary provider. They shifted to a new house that came as a part of the alimony and she began working as a librarian. He told Manorama News,

“I always wanted my mother to have a companion. But she would never hear of it. Sometime ago, a proposal came with the help of friends from the library council. Though initially my mother opposed to the proposal, she eventually agreed.”

The post has since gone viral and here’s how people reacted to it: 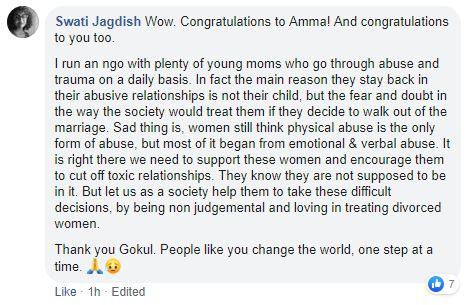 As per the data analysis by Plain Facts, the share of widowed, separated and divorced women in India is higher as compared to men. The study also suggests that women might be marrying less in India than men, even though data from the Indian Human Development Survey (IHDS) shows that majority of the respondents seem to be in favour of widow remarriage.