On the occasion of International Women’s Day, United Nations Goodwill Ambassador and Hollywood actress Anne Hathaway delivered a powerful speech on the subject of paid parental leave. The 34-year-old actress, as an extension to Emma Watson’s HeForShe campaign, spoke about empowering men to empower women.

In her address, Anne Hathaway recounted the days of her childhood and how, having given birth to her son last year, affected her outlook. After her son Jonathan was born, Hathaway wondered how she would balance work and her personal life. Women in America are entitled to 12 weeks of unpaid maternity leave. However, it struck her that men are entitled to no such parental leave. 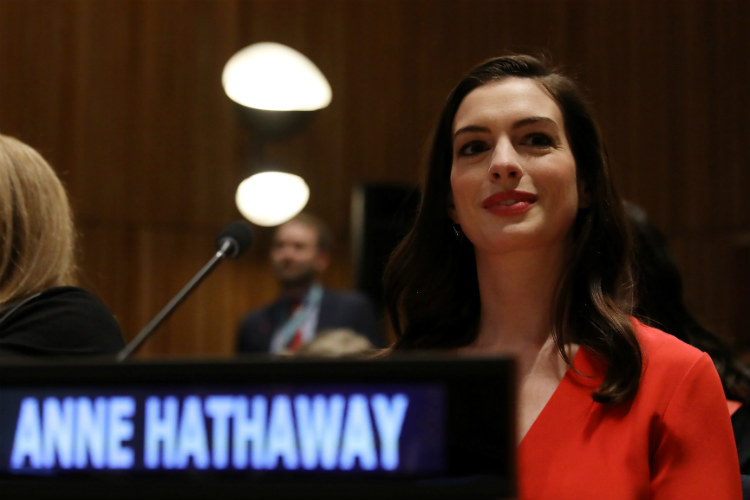 Hathaway spoke of the desensitisation of men and how these gender biased regulations promote men to be the emotionally-stunted breadwinners while women are pushed into handling household work. “The deeper into the issue of paid parental leave I go, the clearer I see the connection between persisting barriers to women’s full equality and empowerment, and the need to redefine and in some cases, destigmatize men’s role as caregivers. In other words, to liberate women, we need to liberate men,” she stated in her address at the United Nations.

She recalled the days when she couldn’t spend enough time with her own father, emphasising on the fact that that is the case with most families. Fathers are forced to work after their child is born, forced to earn more with one more mouth to feed. This predicament distances fathers from children and women end up sacrificing their careers to make up for the absence of the father, embracing their role as the nurturer.

Also speaking on the subject of homosexuality, Hathaway said, “It (gender biased paternal leave) cannot serve the reality of a world in which there is more than one type of family. Because in the modern world, some families have two daddies. How exactly does maternity leave serve them?”

Affirming that parity on the subject of paid parental leave benefits the society in more ways than one, she said, “In fact, a study in Sweden showed that every month fathers took paternity leave, the mothers’ income increased by 6.7 per cent.”

Hathaway voicing the subject displays the true spirit of feminism which promotes gender equality and works towards building a stronger society rather than cause society separating the cause of empowering men and women. The latter approach has caused our world to become more divisive and we need to look at feminism itself through a more gender neutral lens.