Nigar Nazar is a bright, shining star in the man’s world of cartoon strips and animation in Pakistan. A talented artist she owns an art studio Gogi Studios, based on her most popular character Gogi. In her early days she experimented with comic strips and animation, and today she offers workshops on live cartooning in educational institutions.

Nazar’s works have specifically highlighted the issues of women’s rights, domestic and religious violence, environment, anti-corruption and religious tolerance. Her comic books deal with a range of issues from extremism to girls’ education. She uses her art as a platform for educating and creating awareness for the grassroot level of Pakistan. 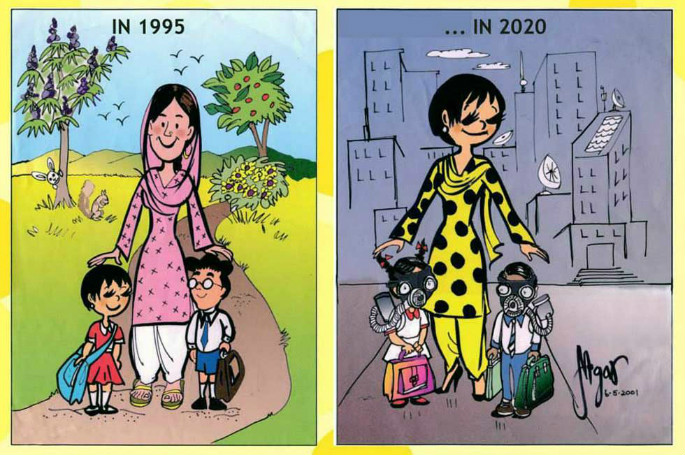 Her comic character Gogi is a short bob, polka dotted, bubbly girl who breaks all stereotypes of how women should conduct themselves in private and public. It received a huge traction and popularity at the time of its launch, as women shied away from talking of women’s issues let alone writing or drawing about them. When she started appearing in newspapers she became a source of amusement to the readers and taught them to smile in the most cornered situations of life.

The idea with cartoons and comic strips is to express the most complex of issues in simplest of ways. Gogi had a huge impact as she discussed many different issues and reached a large amount of people. Nazar’s audience spans from older women to children as she has worked on a lot of children’s books as well:

“Even though my kids are always telling me that cartoons should be pure entertainment. I tell them I’d love to do that from time to time, but look, issues are always cropping up that need to be commented on.” 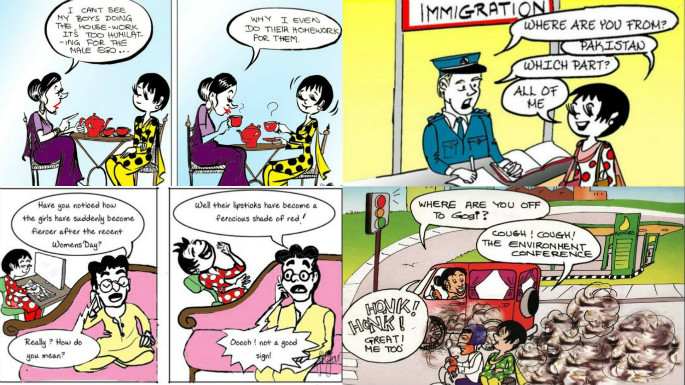 Nazar has earned an international reputation because of how she presents social issues. She has had many opportunities to attend international conferences. When asked in an interview with Newsline Magazine, whether she faced any problems or issues due to her nationality, she said:

“No, in fact, I feel proud to represent Pakistan as a woman for two reasons. Firstly, people overseas have a stereotypical image of Pakistani women. I would like to think that my being a female cartoonist dispels that image to a certain extent. Secondly, whether as a member of the international jury of cartoonists in Turkey, or as a founding member of APPACA (Asian Pacific Animators and Cartoonists Association). I almost always found myself to be the only woman cartoonist present. Interestingly, even the western countries were not represented by any women cartoonists. Yes, I have been singled out many times, but only in a positive sense. As the first woman cartoonist from the Muslim world. Perhaps, I would not have attracted as much attention if I had not been from Pakistan.”

Nazar is bent hard on creating a space for women in the creative industry and she uses her cartoons to educate, entertain and inspire women in Pakistan and all male regressive societies to pursue their dreams.