It’s not possible to go through Diwali without witnessing animals, both pets and stray, cowering and hiding during the festive season. The sound of crackers often scare these poor beasts so much, they resort to yelping and howling in fear. But how often can you hear it over the loud boom of your firecrackers?

Bursting crackers may be a mode of entertainment for some of us but it severely affects health of birds and animals, at times, it costs them their lives too. The Supreme Court has issued a series of guidelines for this year’s Diwali, which includes setting a time limit on how long crackers can be burst, and specifying that only  ‘green firecrackers’ be used on Diwali in the Delhi-NCR region. The SC’s caveat has the social media divided, as it has drawn both warm and adverse response on Twitter. However, lesser crackers will be a big relief for the canines and birds which inhabit the human settlement.

1) Why must animal be protected from loud explosions?

Canines like dogs can hear sounds seven times louder than human beings. Certain frequencies of sound register 40 times more in dogs than they would in humans. According to World Animal Protection, a global animal welfare organisation, “Animals have well developed olfactory receptors which protect/alert them from accidents. So if the sound/vibration goes above certain level it could become lethal.”

2) Which species are more vulnerable?

Birds and young animals like small puppies and cats, are more vulnerable to loud explosions as they adversely affect their hearing. Their fear manifests through psychological signs like shaking, trembling, excessive drooling, barking, howling, trying to hide under beds or behind doors or getting into or out of the house. “Birds leave their nest at night and it becomes difficult for them to come back. Some even die because of the shock,” the NGO told InUth.com.

3) Does it affect the milk yielding ability of milch animals like cows? 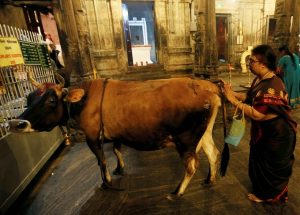 The milk yield of milch animals gets reduced significantly the day after Diwali night. “When animals are milked after crackers are burst, there is reduced effectiveness of milk ejection reflex, decreased efficiency of milk removal and increased residual milk, leading to overall reduction in milk yield,” Dr Aman Mauj, a veterinarian told Times of India.

4) How to ensure that your pets are safe?

First things first, you should not take your pets outside on Diwali or on days when crackers are being burnt. “One must avoid keeping their pets outside, pets should stay inside but allowed to roam around in the house. Pets should not be left alone. It is good to play with them to distract them from such sounds/noise,” World Animal Protection told InUth.com in an email communication.

Creating awareness is the need of the hour, at the same time, people who shamelessly use this occasion to abuse animals should be brought to justice.