In a shocking case, surgeons at Tamil Nadu Veterinary and Animal Sciences University (TANUVAS) in Vepery have removed over 50 kg of plastic waste from a cow’s stomach.

The cow was brought to the institute after it was found to be in pain after ingesting plastic while foraging. The cattle’s yield of milk decreased despite having delivered a calf a few days ago and it repeatedly kicked itself in the stomach. It took the veterinarians over five hours to surgically remove 52 kg of plastic.

“The incident exemplifies the threat to animals posed by plastics discarded indiscriminately by the public. Even though we have removed plastics from cows in the past, the quantity this time — 52 kg — is unprecedented.” 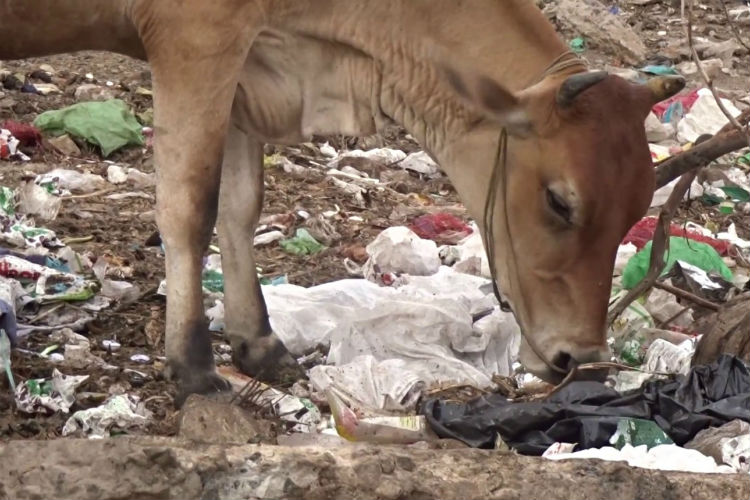 Not the only incident

Earlier this month, a cape buffalo died after eating polythene at National Zoological Park in New Delhi which was declared plastic-free. Parag Madhukar Dhakate, the conservator of forests in Uttarakhand, had shared a picture in July of leopard eating a plastic bag. He had also shared an image of an elephant climbing out of a swamp of plastic waste. In September, Union minister Rattan Lal Kataria said that ‘lakhs of animals were dying’ in Mathura due to the widespread use of plastic. A JNU study conducted in Uttarakhand found out that plastic dumps are changing the food habits of animals, with birds using their beaks to pull out waste from plastic containers and many times flying away with the container itself.

According to Blue Cross of India (BCI), an animal welfare charity, 90% of cattle roaming in and around Chennai have plastic waste in their guts because of resident and municipal corporations dumping garbage on the roads. This leads to an accumulation of plastic waste in the rumen — one of the stomachs of cows — and can result in anorexia, starvation, respiratory problems and death.

“These surgeries are gruesome. Often, we remove 20kg-30kg of material in wet weight from inside the rumen of cows brought here. The only way to reduce the suffering in such cases is perhaps to put the animal down.”