An elephant came to the rescue of a four-year-old girl after she fell from a scooter in West Bengal’s Jalpaiguri district. The incident, according to forest officials, took place on NH-31 near Garumara forest when Ahana along with her parents, Nitus Ghosh and Titli Ghosh, were returning to Lataguri after offering prayers at a temple inside the forest. Her parents stopped the two-wheeler after seeing a herd of elephants was crossing the road. After the herd crossed, they resumed their journey. However, some elephants seemingly appeared suddenly and their scooter almost ran into them. Ghosh applied brakes but lost control of the vehicle, and the parents as well as the child fell on the road.

An elephant broke away from the herd and apparently stood guard, sheltering the young girl as the other tuskers carried on. Sensing trouble, a truck driver who witnessed the incident, hooted the horn incessantly to speed up the elephants. As the last of the elephants left the road, Ahana safely came back to her mother’s arms.

Ghosh and his wife who were injured when the scooter fell, were admitted to a nursing home in Jalpaiguri. Doctors in the private facility said the girl suffered no external injury but was scared by the incident. 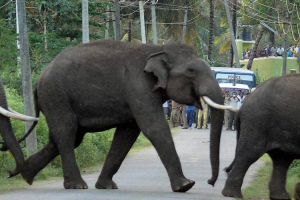 Uninhibited deforestation has led to an increase in human elephant conflict in past few years. In the three years between 2015-2018, human-elephant conflict caused 1,713 human and 373 elephant deaths by unnatural causes, including electrocution and poaching. Data presented by Dr Mahesh Sharma, Minister of State in the Ministry of Environment, Forest and Climate Change (MoEFF) in the Parliament showed that the highest numbers of human casualties had occurred in West Bengal (307 deaths), followed closely by Odisha (305). In 2018 alone, Dr Sharma said, 227 people were killed by wild elephants in 16 States, with Assam reporting the highest number (86).