After making a splash across the world, Elephant Parade, a global initiative to spread awareness about elephants, is set to overtake Mumbai over the next three weeks. No, these are not real jumbos; it’s a public art festival comprising 101 sculptures of elephants, each designed by an artist, designer or a prominent personality.

Around the world, the Elephant Parade has collaborated with prominent people such as Richard Branson, Katy Perry, Tommy Hilfiger, Elizabeth Hurley and Bryan Adams. In India too, several artists including megastar Amitabh Bachchan, designers such as LN Tallur, Sabyasachi Mukherjee and Masaba Gupta have painted the elephant sculptures. 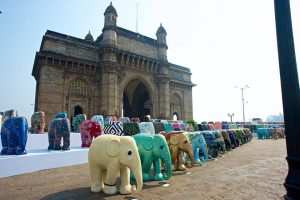 The festival was inauguarted last Sunday by Maharashtra Chief Minister Devendra Fadnavis. Starting March 3, the elephants will be herded to public spots across Mumbai.

Founded in 2006, the initiative involves exhibition of colourful sculptures of elephants at open spaces to sensitise people about elephants and saving forests. Later, the sculptures are auctioned online, with all the proceeds going towards raising funds to build elephant corridors across the country.

These corridors are vital connections between forested areas that allow elephants and other wild animals to move freely. As the elephants tour Mumbai, you can bid on any one of the 101 elephants on Paddle.com. Their prices start from Rs 3-5 lakh, and the bidding will be open from March 3-22. 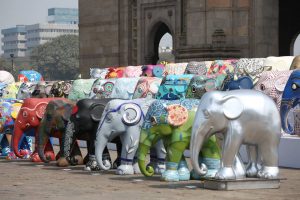 “We have chosen to make them accessible to the public so that people can feel free to touch them and take photographs. We want this to be for everyone,” Ruth Ganesh, trustee of Elephant Family, the UK non-profit hosting this edition, told Hindustan Times

Till Now, the exhibition has been successfully conducted in 24 cities across the world—including Milan, London, Singapore and Bangkok.

In first week of March, the exhibition will be conducted at Gateway of India, Priyadarshini Park, Palladium Mall, Siddhivinayak and the Mantralaya. 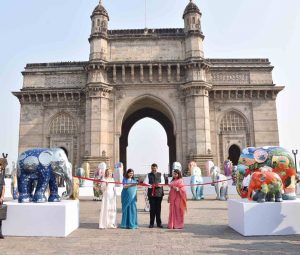 From March 8-11, the display will move to the central suburbs, in R City Mall, Ghatkopar, Phoenix Marketcity Kurla and the Grand Hyatt in Kalina, with a display at Reliance Jio Gardens in the Bandra-Kurla Complex from March 9 to 11.

From March 14-18, the Elephant Parade will be in the western suburbs —- Carter Road Beach and Amphitheatre, Bandra Fort, Infiniti Malls in Andheri and Malad, Taj Land’s End in Bandra and the Bombay Arts Society in Bandra.