Annie Besant was a social reformer and one of the most iconic exponents of the Indian freedom movement. Born into a middle-class family on 1 October 1847 in London, Besant had a tough childhood, partly due to loss of her father when she was just five.

She was married to Rev. Frank Besant, a clergyman in 1867. The couple had two children- a son, Arthur Digby, and a daughter, Mabel. However, due to her increasingly anti-religious views, the couple parted ways just five years after their marriage.

In 1874, she joined the National Secular Society and was involved in the free thought and radical movements led by Charles Bradlaugh, MP. Later, she also became a member of the Fabian Society, a noted socialist organisation. 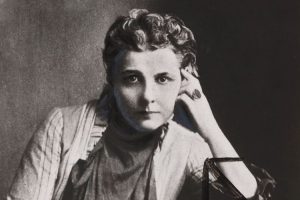 She was also the co-editor of National Reformer, a weekly through which she advocated ideas which were ahead of the time such as trade unions, national education, right for women to vote, and birth control.

For a pamphlet on birth control, she along with Bradlaugh were found guilty of publishing an “obscene libel” and sentenced to six months in prison.   In court they argued that “we think it more moral to prevent conception of children than, after they are born, to murder them by want of food, air and clothing.” At the Court of Appeal the sentence was quashed.

She had actively involved in the London match girls strike (1888) and the Bloody Sunday protest (1887). She set up a committee of women for seeking better pay and conditions. Known for her oratory skills, Annie’s speech had a lasting impact on members of the Fabian Society and the Marxist Social Democratic Federation (SDF).

She first visited India in 1893 and her undisguised preference for the Indian spiritual heritage won her many admirers in the country. She was associated with various cause including the emancipation of women, education and most notably, took part in Indian freedom struggle. Once, Mahatma Gandhi said about her that she awakened Indian people from their deep slumber. 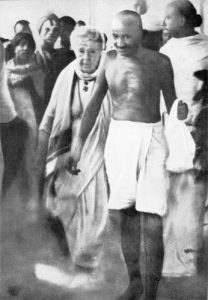 Gandhi was a huge admirer of Besant. In fact, he kept pictures Annie Besant on the walls of his law office in South Africa. He was also associated with Theospohical society for a short period of time. However, he ended the association as he believed that the organisation pays too much attention to intellectual development rather than brotherhood.

In 1919, Gandhi launched Satyagraha against British rule which later took a violent turn. Besant declared her opposition to Gandhi’s movement as he took effective control of the Congress party. Besant left Congress and joined the Liberal Party. Her principal objection was to Gandhi’s making it a mass movement since, she said, the average person does not have the ability to meet physical abuse with non-violence and therefore, she correctly predicted, the movement would quickly turn to violence — or “brick-bats and bullets” to use her expression. She famously stated that Gandhi was a “saint” but not a “politician.” Gandhi, of course, steadfastly rejected her criticism, putting his faith in what he believed was the inherent peaceful nature of the Indian population.

Also Read: From being a Muslim to stories around his relationships, 7 bizarre conspiracies around Jawaharlal Nehru

In 1898, she established Central Hindu in Varanasi. Later she also helped in establishing the Hyderabad (Sind) National Collegiate Board, Mumbai, India in 1922. In 1907, she became the president of Theosophical Society which was headquartered at in Madras (Chennai).

Along with Lokmanya Tilak, she co-founded the Home Rule League in 1916 which aimed to campaign for democracy in India and dominion status within the Empire.

In June 1917, she was arrested and interned at a hill station, where she defiantly flew a red and green flag against the British empire. Her arrest was vehemently opposed by both Congress and Muslim league as both threatened protest if she were not set free. The government was forced to that the ultimate aim of British rule was Indian self-government and moves in that direction was promised. Besant was freed in September 1917 and was welcomed by crowds from all over India. Later she was elected as the first woman president of the India National Congress in December 1917. 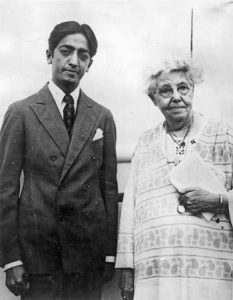 In late 1920s, she travelled to the United States along with her protege and adopted son Jiddu Krishnamurti, who went on to become one of the most outstanding philosopher of the modern age.

Interestingly, she also dubbed Krishnamurti as the new Messiah and incarnation of Buddha, a claim later rejected by the philosopher. 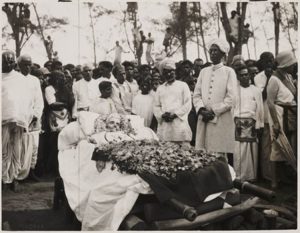