Sri Lanka suffered a stunning defeat in the hands of minnows Bangladesh. Well, they are not minnows anymore, are they? But, it seems like the Sri Lankan media cannot digest the fact that at the end of the day, it’s just a game. Criticising them for the lack of form, foul decision-making and performance is justified, but printing an obituary of them is just plain stupid and disrespectful to the spirit of the game and their country’s cricketers.

The Test defeat at P Sara, Oval was clearly one of the worst defeat they have ever recorded, losing the Test by 4 wickets. Sri Lankan newspaper The Island took a harsh turn by publishing an obituary of Sri Lankan Cricket that read ‘RIP Sri Lanka’.

This happened after Sri Lanka lost the second Test against Bangladesh on March 19. Take a look at the obituary printed in the newspaper. 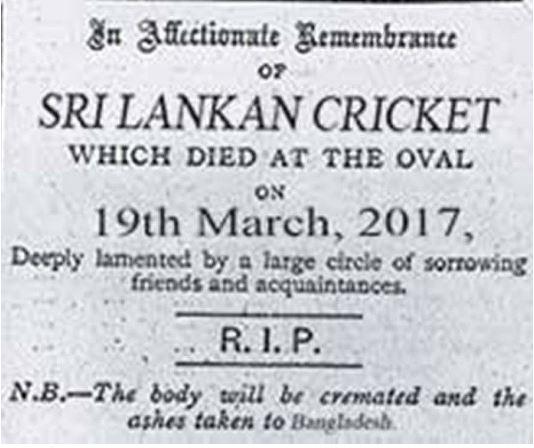 The newspaper did not just stop there and printed a cartoon of Thilanga Sumathipala who is the President of Sri Lanka Cricket carrying a casket. The casket he was carrying had ‘Sri Lanka Cricket’ written on it. An incident like this happened 135 years ago when England lost to Australia in ‘the Ashes’. At that time, English newspaper declared England Cricket ‘dead’.

The Bangladesh vs Sri Lanka series is nicely poised at 1-1 after an infamous defeat which would not be forgotten for decades under the captaincy of 39-year-old Rangana Herath. However, it is quite ironic that Sri Lanka were able to beat Australia quite easily in 2016 but fell prey to a lowly Bangladeshi side who recently lost quite comprehensively to India in one-off Test at Hyderabad.