At least four students of Jawaharlal Nehru University (JNU) have been fined Rs 20,000 each for protesting against Prime Minister Narendra Modi’s remarks that selling pakodas is a form of employment.

The varsity, according to Indian Express, also withdrew hostel privileges from one student for two semesters and punished three others with a hostel transfer over alleged indiscipline.

The IE report said that the four activists of the National Students’ Union of India staged a protest against Modi’s remarks and also against JNU’s move of compulsory attendance for all courses.

An order issued by the Chief Proctor said that the varsity has prima-facie evidence against four students who were involved in the “acts of indiscipline”.

The order, dated February 9, said that the protestors blocked a bus stand and a road near JNU’s Administrative Block which caused inconvenience to students, teachers, staff, visitors and schoolchildren. It also accused the NSUI members of forceful cooking of food at the protest site in spite of repeated requests from CSO (chief security officer) against it. 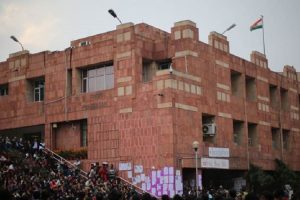 “The Vice-Chancellor, in exercise of the powers vested in him… has ordered to impose on you a fine of Rs 20,000 and transfer to another hostel from the present hostel accommodation with immediate effect,” read notices issued to three students — Alimuddin, Mukesh Kumar and Manish Meena.

Another issued to Vikas Yadav, mentions the fine as well as “withdrawal of hostel facility with immediate effect for a period of two semesters”.

In a TV interview on January 20, the Prime Minister had said that selling Pakodas also counts as employment and can be seen in the light of ‘job creation’.

“Even an individual selling pakodas at a road-side stall outside the channel’s studio earns Rs 200 a day and is ’employed’.”

The remarks drew sharp criticism from opposition and student bodies which alleged that the prime minister is making excuses for the lakhs and crores of promised-yet-undelivered employment .