The 68-year-old had initially been hospitalised for depression and was under medication at home.

“Diaz-Balart, who had been attended by a group of doctors for several months due to a state of profound depression, killed himself this morning,” the Cubadebate website said.

Fidel Castro Diaz-Balart was the first born son of the late Cuban revolutionary Fidel Castro. His close resemblance with his father earned him the moniker of “Fidelito” or Little Fidel.

Castro Junior was born in 1949, a decade before his legendary father led a revolution against Batista regime and built a communist state on the doorstep of the United States.

The 68 year old was a nuclear physicist who studied in the former Soviet Union. He headed the island’s nuclear programme from 1980 to 1992, before it was suspended after the Soviet Union’s collapse. 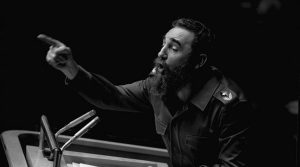 At the time of his death, he was a scientific adviser for the Cuban Council of State as well as vice president of Cuba’s Academy of Sciences.

His mother, Castro’s first wife Mirta Diaz-Balart, was a woman from Cuba’s aristocracy whom Castro married in his youth before beginning the revolutionary struggle.

However, when he came to meet his father in Mexico in 1955, Castro did not allow the 6-year-old to return to his mother.

This triggered a tug of war for the custody of the child. Fidel Jr was then kidnapped by armed men who worked for his mother’s family. However, it was Castro who won this family battle in the end.

His maternal family went on to become prominent names in the anti-Castro brigade in United States.