The results are out and Samsung, the mighty warrior of smartphones, has fallen.

As shocking as it seems, Korean smartphone giant Samsung, which dominated the global charts since 2011, has slipped to the second spot in the global smartphone ranking by selling 77.5 million headsets in the final quarter of 2016 as against its arch-rival Apple that bagged the top spot by selling 78.3 million handsets.

According to a report by the research firm Strategy Analytics, Apple sold more smartphones than any other company in the world by displaying an impressive 18 per cent market share in the fourth quarter of 2016. Samsung, on the other hand, witnessed a decline of 5 per cent annually, wherein the company’s sales declined from 81.3 million units in the fourth quarter of 2015 to 77.5 million units in 2016.

The reasons for this shift of power positions are many. The year 2016, as we all know, didn’t go well for Samsung. From the smartphone batteries that won’t stop exploding to the recall of one of its flagship smartphones, Samsung Galaxy Note 7, the year was full of lows for the company. In fact, the company captured just 18 per cent share for Q4 of 2016 and 21 per cent share in the entire year, which BTW is its lowest since 2011. 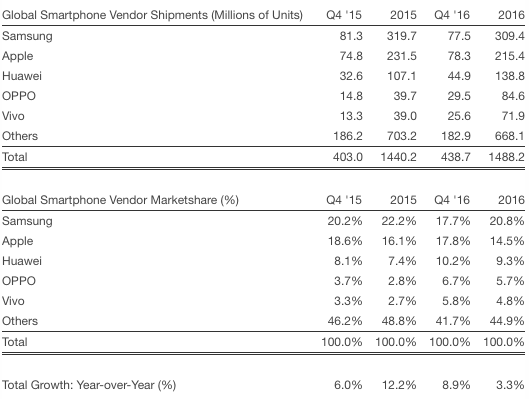 ALSO READ: So this is why Samsung Galaxy Note 7 was exploding!

Apple, on the other hand, witnessed the tide shifting in its favour and the ‘no headphone jack’ gimmick just worked positively for them.

ALSO READ: Here’s everything you need to know about the rumoured iPhone 8

However, there’s still some hope for our mighty warrior. Talking about the global sales for the entire year, Samsung sold a total of 309.4 million units as against Apple’s 215.4 millions units, thereby retaining its top spot.

With the rumoured Samsung Galaxy S8 coming out in a couple of weeks, Samsung could bounce back to its top spot, displacing Apple. Till the first quarter of 2017 brings us some fresh updates, all we can say is, rest Samsung rest, even the super-heroes need a break!