Actor Sanjay Dutt has had a brutal past. He was a drug addict and he now makes it a point to not hide that among people. Dutt was in Delhi a few days as a special guest at an event where he took a moment to talk about that gruesome phase of his life. He mentioned his personal experiences and revealed ways to combat drug addiction. Here’re a few revelations he made at the event:

On travelling with drugs:

On when he finally realised he needed help:

There was an instance when I came home high, had alcohol and then went to bed. When I asked my servant to get me something to eat, his response shocked me. He said, “Baba aap do din baad khana kha rage hain.” I looked at myself in the mirror and felt ki main 100% marne wala hoon. That was when I aksed my father for help.

On the reason why he started taking drugs: 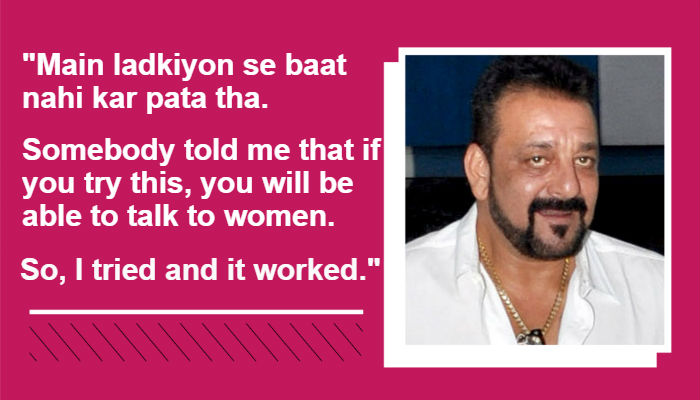 On being convicted for the illegal possession of firearm:

That AK-56 was given to me by a producer because I was fonod of guns and hunting. I thought I would take it to Khandala, thoda chala vala ke phek dunga. Ie kept it in the car dicky and forgot about it and went to Mauritius.

On Ranbir Kapoor chasing him:

Ranbir wants to spend days and weeks with me, but I can’t spend more than half an hour with anybody. I have been trying to avoid him, it is a difficult role for him to play.

Also read: Will Sanjay Dutt’s Bhoomi be what Shivaay should’ve been for Sayyeshaa Saigal?