If you think Delhi’s depleting air quality is unbeatable, think again. Three cities in north India have edged past the national capital to earn the tag of the most polluted cities in the country, a study released by IIT-Kanpur and Shakti Foundation revealed. While Patna emerged as the forerunner, Kanpur and Varanasi occupied the second and third position respectively on the list.

According to the report, Patna, Kanpur, and Varanasi recorded the worst levels of pollution with 70% poor and very poor Air Quality Index (AQI) days. In the entire period, Patna did not witness a single day with good air quality with particulate matter (PM) 2.5 levels hitting 170 micrograms per cubic metre and above. Notably, PM 2.5 particles reduce visibility and cause serious health issues in the general populace, an issue that the government has been unsuccessfully trying to address for several years now. 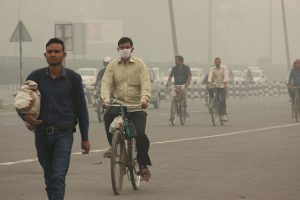 The highest daily averages were recorded in Kanpur, Patna, Delhi, Varanasi, and Dehradun during the Diwali week in November. Kanpur, in particular, had several ‘severe’ air quality days with persistent pollution levels, peaking at 355, 449 and 305 micrograms per cubic meters at the time.

Underlining that several steps are being taken to address the issue, Bihar environment minister Sushil Kumar Modi also cited the location of the Ganga near the Bihar capital as a reason for the city failing to achieve the required environmental standards.

“Cities situated along rivers are usually the most polluted. There is a big mound near Patna, and when wind blows, the air brings in a lot of dust. This happens primarily in the winter,” NDTV quoted him as saying.

“…Brick kilns that do not conform to our norms have been banned. We have asked builders to cover structures under construction to ensure that the air is not further polluted, and asked for roads to be cleaned regularly…” he added.