Central government run Lok Sabha TV has appointed controversial journalist Jagrati Shukla, who once advocated for a “genocide in Kashmir” and said the Sikhs “deserved” 1984 massacre, as an assistant producer in the channel.

While Shukla’s Twitter bio says she’s a “consultant” at Lok Sabha TV, the selection notification on Lok Sabha website shows her name under the category of assistant producer. According to the notification, the interviews for the posts were held in December 2017.

Shukla, who’s earlier worked with Zee TV and News 18, has evoked multiple controversies through her tweets.

Last year, Shukla, was in the eye of a Twitter backlash following her tweet in the aftermath of the murder of senior journalist Gauri Lankesh in Bengaluru. 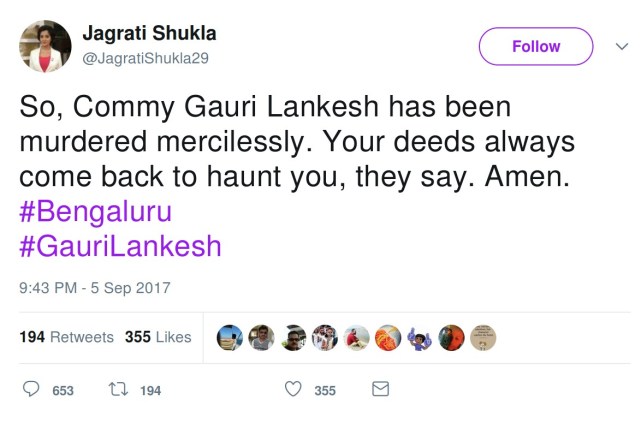 Early this year, Twitter suspended Shukla’s account for a brief period of time following her tweet which many interpreted as an incitement to violence against Muslims. 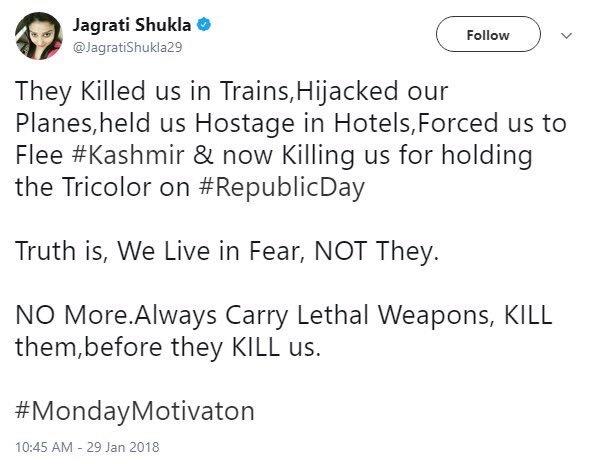 Hamid Ansari is a sophisticated Jihad Apologist. It’s a matter of absolute shame that he was the vice president of India.Even after being so well educated and holding such high constitutional offices his mindset hasn’t changed one bit.There are rumors that he even runs a Madarsa.

When contacted, Editor, Lok Sabha TV, Shyam Kishore Sahay said “he’ll look into the matter.” He didn’t elaborate if there would be any action against the employee.

Shukla’s social media conduct has come under scanner after a US-based consultancy sacked one of its employees in India on Saturday over his “violent” and “abusive” tweets against Kashmiri women.

In a series of tweets, Ashish Kaul, a Kashmiri Pandit, not only condoned violence and rape in Kashmir but also suggested that the people of the Valley should be “killed” economically as a result of which Kashmiris will have to “sell their daughters, wives in Delhi, Mumbai and Chennai to feed themselves.”

Kaul also said that he “loves” it when Kashmiri Muslim women cry on roads and that “we are killing, maiming and raping you at will” for last 28 years. 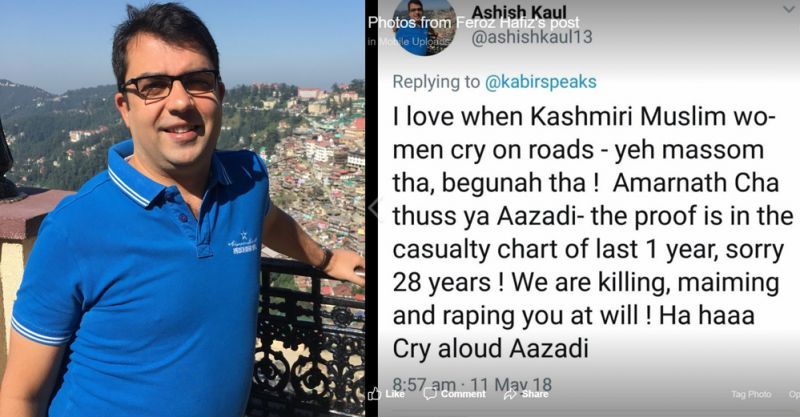 While the tweets triggered a storm on social media, Jammu and Kashmir police booked him under Section 505(1) CrPc and 66 IT Act.

The consultancy Development Dimensions International (DDI) also issued a statement on the issue.

“As soon as we learned about the social media posts, we immediately suspended the employee and launched an investigation to determine the full scope of the issue. As of May 12, we have accepted the individual’s resignation. This individual’s opinions were his alone, and do not reflect the values of DDI,” the firm said.